31st Oct, 2019 Bhubaneswar: IIT Bhubaneswar organized "Rashtriya Ekta Diwas" on the occasion of birth anniversary of Sardar Vallabhbhai Patel’s on 31st Oct, 2019 at its permanent campus, Argul. The event was initiated with a floral ceremonial tribute by the Prof. R. V. Raja Kumar, Director, IIT Bhubaneswar. The Faculty, Staff members and students actively took the Rashtriya Ekta Diwas pledge on the solemn occasion, in which they pledged to dedicate themselves to preserve the unity, integrity and security of the nation and also strive hard to spread this message among fellow countrymen in the spirit of unification of the country, which was made possible by the vision and actions of late Sardar Vallabhbhai Patel.

Prof. R. V. Raja Kumar, Director, IIT Bhubaneswar addressed the audience where he emphasised the actions of Sardar Vallabhai Patel, the monumental importance and the gruelling groundwork of the efforts put by The Iron Man. He said that the Iron Man of India was instrumental in uniting all the 550 princely States. He also touched upon the fact that at IIT Bhubaneswar, we have always believed in creating a feeling of one nation and the best example is the successful completion of Ek Bharat Shresht Bharat programs which were completed as per the mandate from the ministry. At IIT Bhubaneswar, we have always believed in making the education system broader and meaningful, so we introduced the Odissi Dance form and we intend to introduce more art forms in the curriculum in coming times making us the first educational Institute in the country to offer such a course. He stressed on the fact that all of us must dedicate ourselves to maintain integrity and security to the unity of the nation and also it should be done to spread the message among all the citizens.

Dr. Kiran Seth, Founder of Spicmacay spoke about the power of Indian Classical music, the objective of Spicmacay and the role it has been playing in national integration. The inaugural session was an extremely soulful flute program by Padma Vibhushan Pt. Hariprasad Chaurasia accompanied Pt. Subhankar Banerjee on tabla. Pt. Hariprasad Chaurasia enthralled the audience and took them to a different mood.

Furthermore, on the eve of Rashtriya Ekta Diwas, a “Run for Unity” was organized starting from IIT Administrative Building to Hari Bhaina Chaka, Jatni and return to end up at the Main Gate of the institute, covering a distance of approximately 8 Kms. As many as 550+ students, family and staff participated in the Unity Run with a lot of enthusiasm and patriotic fervour. 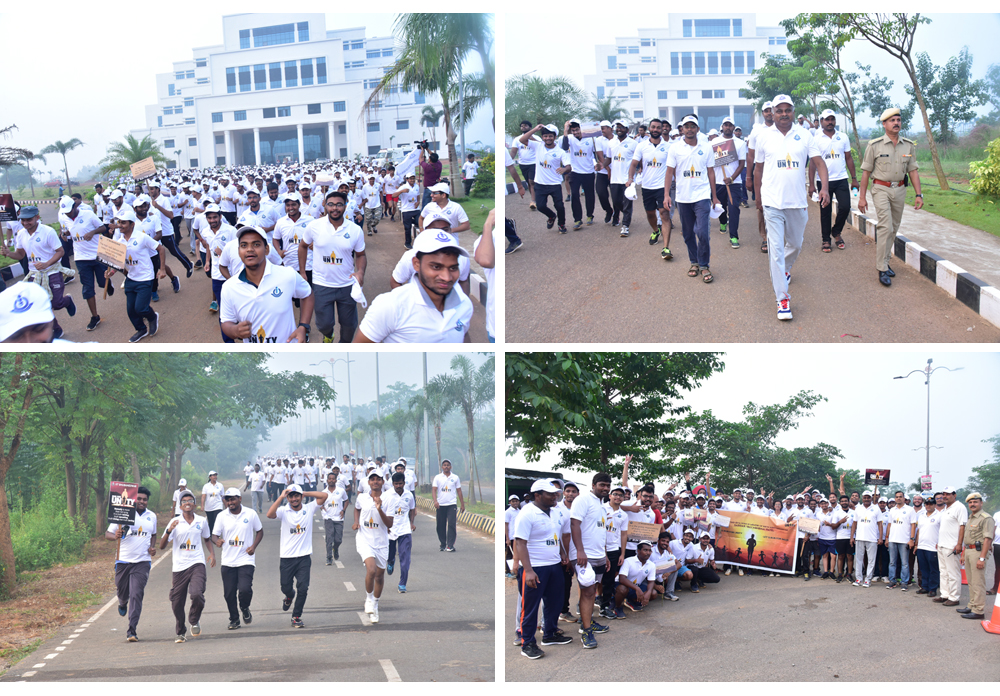